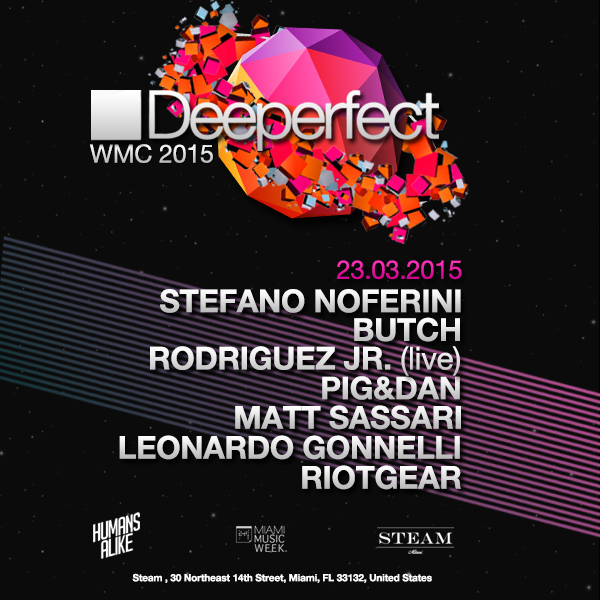 Deeperfect brings European techno and tech-house to Miami for the WMC 2015!

With a line-up that boasts some of the most successful names in the industry including Stefano Noferini, Butch, Rodriguez Jr. (Live), Pig & Dan, Matt Sassari, Leonardo Nonnelli and RiotGear. This melting pot of European talent is sure to deliver, so prepare to have the roof blown off!

Join Deeperfect and the crew for an unforgettable night at this year’s Winter Music Conference!

More about the artists:

Italian techno legend and deeperfect label boss, Stefano Noferini, started the label more than ten years ago and since then he’s been pioneering new talent and delivering his signature techno and tech-house sounds across the globe.

Butch has been turning house and techno heads for years now. The German producer’s debut album ‘Papillon’ was a melodic tech-house matsterpiece, and as a result he’s been able to place a bunch of major dance labels next to his name having released on Desolat, Cocoon, Visionquest and Hot Creations.

Since his first release on Mobilee Records, the driving and winding ‘Princess Guacamole’, Rodriguez Jr. has made himself right at home at Anja Schneider’s label. The French producer has been busy of late, churning out releases and remixes for Defected, Tenampa Recordings, Traum and We Are EP.

Pig&Dan’s profile as in-demand remixers reached the point where electronic pioneers such as Underworld were coming back for more! Since those early days, they have created a repertoire that not many can match and have constantly been releasing their music on the most respected labels and playing at the best events worldwide.

French DJ and Producer, Matt Sassari, is no stranger to the Deeperfect camp. Having recently been signed to the Deeperfect management roster after a string of successful releases and live events, including taking centre stage at the sell-out arena at Dockyard Festival last year.

DJ, musician, producer and remixer, Leonardo Nonnelli hails from Florence, Italy. He’s been featured on the playlists from the world’s biggest DJs, such as Richie Hawtin, Adam Bayer, Marco Carola, Jamie Jones, Seth Troxler, Sven Vath, Dubfire and many others. His determination and enthusiasm have meant that today he is considered a DJ and record producer high in the techno and house charts all around the world.

Miami based RioTGear have had a number of releases on top record labels including Black Hole, Deeperfect, 1605, Dim Mak, Toolroom, Hotfingers, Blu Music, Gate Null, Aco Tech, MB Elektronics and Phunk Traxx. Now they’re set to join the Deeperfect crew in their hometown to show city how to party European-style!