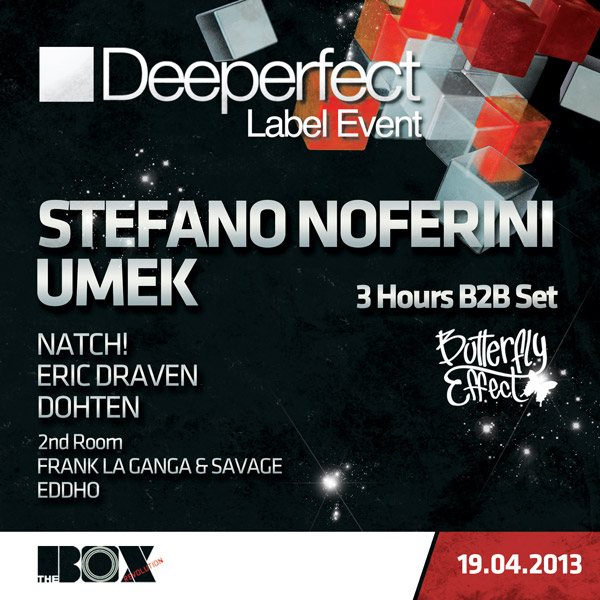 Italian DJ/Producer Stefano Noferini comes back to Florence, his hometown, with his Deepefect Label Night on 19/04/2013 @ The Box (Sesto Fiorentino). Stefano Noferini performs with Umek, a star of the international techno scene.

Stefano Noferini is very well known around the world for the quality of his productions and DJ sets. He makes his hometown dance again on 19 April 2013 with his Deeperfect Label Night. The chosen club is The Box, in Sesto Fiorentino (FI) and the night is dedicated to the sound of Deeperfect, a benchmark for DJs and electronic music lovers of all around the world. It’s a unique night too, because it brings Stefano right back where his long career began. He moved his first steps between local radio stations as Radio Sesto International  and clubs now forgotten as Pink Panther, many years before he become one of the key figures in the international clubbing scene.

During the years, the productions of Stefano Noferini reached often the top of Billboard’s Hot Dance chart, one of the most important dance charts worldwide. Many times his tracks overtook the ones of popstars as Pitbull, Shakira, Lady Gaga and Beyoncé with support by colleagues as Paul Van Dyk, Richie Hawtin, Carl Cox, Umek, David Guetta, Mark Knight and Fat Boy Slim. Clubs where Noferini has performed include Ministry of Sound, Space Miami, Space Ibiza, and Cocoon Frankfurt, among many others. Noferini has also performed at some of the most important festivals worldwide, including Ultra Music Festival, BPM, Global Gathering and many others. Between February and June 2013, he’ll perform only once in his country only on 19/04 in Florence for his “Deeperfect Label Night”. He’ll be in Mexico, Honk Kong, United States, Bulgaria, Germany, Holland, and Switzerland in the mean time.

In Florence Stefano will performer together with Umek, one of the most requested dj’s of the international techno scene. In the last 20 years his records and his dj sets let the world dance with their unique sound. On 19/04, Umek and Stefano come back to Tuscany after a long absence. Noferini and Umek will perform for 3 hours back to back, creating a one-of-a-kind electronic rhythm. They often collaborate on productions as well. One their recent collaborations, “Goes On”, was nominated at IDMA (Internation Dance Music Awards) 2013 as Best Techno Track.

The Box (Via Mercalli 12 , Sesto Fiorentino) it’a Club located in Sesto Fiorentino (Fi) just out of centre of Florence and 15 mins from Florence train Station and 5 min from Florence Airport. From the grand opening only one year ago, the club is making a revoultion in the Florence Techno scene. The Box has already hosted some of the most important international underground  guest such as Monika Kruse, Christian Smith, Felix Krocher, and Kaiserdisco …

Scenic design and performances of “Deeperfect Label Night” are by Butterfly Effect, an artistic staff that work with the students of Accademia delle Belle Arti of Firenze and with the best entertainers and make up artists. The result for the guests will be very different the usual nights at the disco. They will take you in a charming fluo that transporting you in a suggestive experience. The staff is very present in the Florentine scenery and has worked with clubs like Tabasco, The Box and the local historian Tenax. You will surely be amazed!