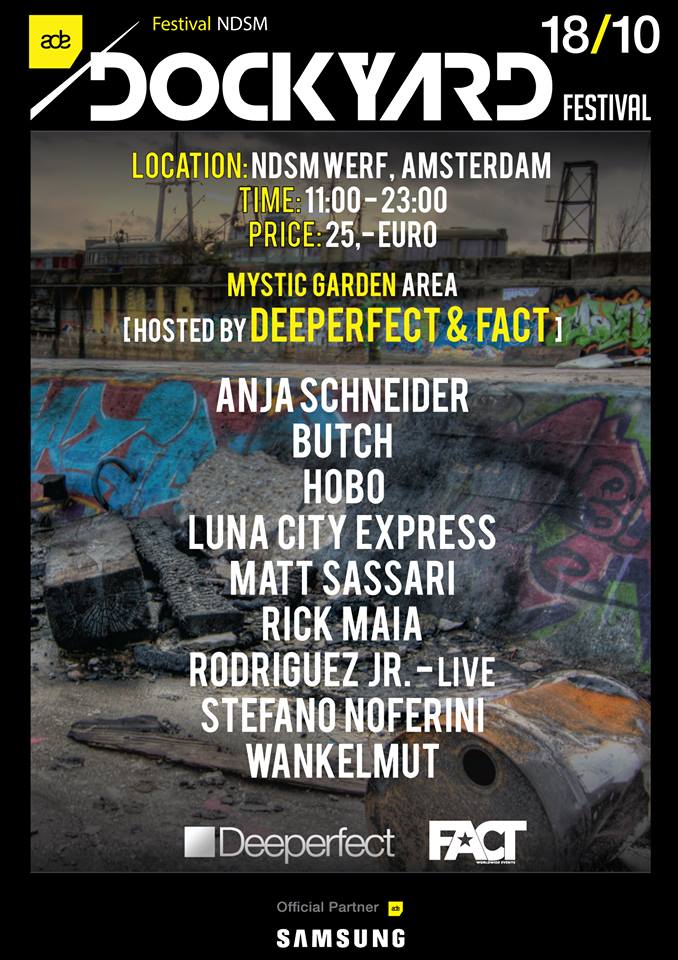 Deeperfect & FACT join forces for the first ever Dockyard Festival!

Deeperfect have joined forces with FACT-Worldwide to bring you a world-class line-up at Amsterdam’s iconic NDSM site. This one-day event offers a dance marathon experience at this years ADE. Located just minutes from Central Station, get ready to sail into a different world. This derelict shipyard, littered with abandoned boats and trams has become a hive of creative activity and provides the perfect setting for first ever Dockyard Festival. Expect raw, energetic techno and melodic vibes from a host of incredible electronic music talent, including Anja Schneider, Butch, Hobo, Luna City Express, Matt Sassari, Rick Maia, Rodriguez Jr. – Live, Stefano Noferini and Wankelmut. Italian heavyweight, Deeperfect, has played host to numerous unforgettable events all over the globe, from Barcelona to Buenos Aires. Founded by Italian techno legend Stefano Noferini the Deeperfect label has been releasing chart toppers for more than ten years!Whilst Barcelona-born FACT has expanded into an international organisation which prides itself on taking the world’s leading electronic music artists into new territories. “Music is the sole reason for us being here and our main goal is to build memorable musical experiences. Like music, we are universal, global and international, and we are always moving, always dancing.”Separately these world-renowned collectives have been making waves in the music industry, and now the two have joined forces expect the result to be monumental. The premier of Dockyard Festival is sure to be one of the most sought-out events of the ADE programme – get your tickets in advance as it’s bound to sell out fast! Dockyard Festival will kick off at 11am on Saturday 18th October and run through ‘til 11pm. Tickets for the all-dayer are available now for €24,50 from Ticketscript.

Mobilee Records’ founder and internationally renowned DJ and producer, Anja Schneider, is sure to bring hypnotic minimal grooves to the Dockyard stage. Following the huge success of her Dubmission EP, released earlier this summer, Anja is set to get the dancefloor bubbling.

Butch has been building his reputation in the industry for more than twenty years, with releases on leading imprints such as Desolat, Cocoon, Visionquest, Sei Es Drum and 2014 has seen the launch of his own label, ‘Otherside’ a joint venture with Sebastian Hohberg. Expect to hear individual sounds merged into a new context and an expansion of the existing soundscape.

M-nus techno trailblazer, Hobo, will be flying in to deliver his raw form of techno expressionism: it is music for all recesses of both your mind, and the dance floor. His debut album ‘Iron Triangle’ released earlier this year has been a critical success, it explore stripped back synth textures, minimal grooves and comes doused in plenty of organic atmosphere.

Considered as one of the most important couples inside the House and Techno scene. A reference in the new German House, which is looking away from the Electro-House, recapturing the old Chicago House spirit, Luna City Express are sure to bring it to the Dockyard decks.

French DJ/Producer and Deeperfect regular, Matt Sassari, is no stranger to the techno charts with his own tracks, as well as remixes for Stefano Noferini and Ant Brooks. And with huge support from Richie Hawtin, Dubfire, Paco Osuna and Carlo Lio he has proven he’s on the way to the top. Get ready for a techno storm!

FACT artist Rick Maia will be demonstrating his extraordinary technical ability on the decks and is sure to play some of his recent productions coming out on labels such as KINA Music with support from the likes of tINI, Enzo Siragusa Cesare vs Disorder, Mihai Popoviciu and others. In recent times he has been everywhere from Space Ibiza to Warung and D-Edge in Brazil, making waves wherever he goes.

Mobilee’s new master of eclecticism, Rodriguez Jr. is one of the hottest underground producers out there transmits an incredible energy during his live shows.. If you spend much time on the dancefloor then there is no doubt you will have got down to many of his insatiable grooves which have recently taken the Beatport charts by storm, including the ‘track of the summer’- Mustang.

Stefano Noferini, Italian techno legend and head of Deeperfect, will be delivering his signature techno and tech-house sound which merges all the musical elements at his disposal into a sound experience that is world-class.

Finally, Berlin techno/house DJ and record producer, Wankelmut, will be taking over the decks. His meteoric rise to fame came in 2012 when the remix hit “One Day / Reckoning Song (Wankelmut Remix)” went viral and turned into one of house music’s biggest anthems.